Some Facts about Geometry – Math is Fun

If you are a fan of mathematics and enjoy reading some history whereas learning wherever several of our modern concepts came from then you will enjoy this article for sure. Realize fascinating facts and data associated with works made by the traditional Egyptians, Babylonians, Greeks and other well-known mathematicians.

So here are some facts about geometry which makes mathematics more fun: 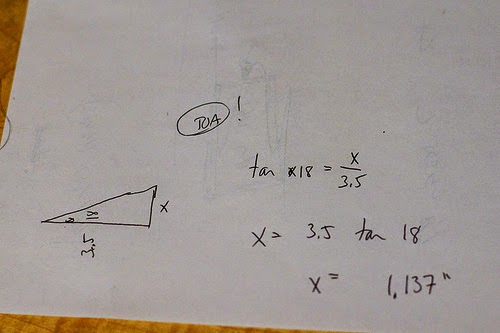 Some facts about different shapes:
Hope you have enjoyed reading this fun list. If you have something more to say please write in the comment section below.
Posted by Kate Steve at 05:02 0 comments

Email ThisBlogThis!Share to TwitterShare to FacebookShare to Pinterest
Labels: Geometry

During the century before Newton and Leibniz the works of Greek mathematicians were popular, especially the work of Archimedes. Infinitesimal techniques were developed for calculating areas and volumes, and Johannes Kepler (1571-1630), shown at left, contributed to these developments.

His interest in calculating areas and volumes stemmed from an incident that occurred when he married for the second time in Linz, Austria, in 1613. Kepler had purchased a barrel of wine for the wedding and the wine merchant’s method of measuring the volume at first angered him. This inspired Kepler to study how to calculate areas and volumes and to write a book about the subject, Nova stereometria doliorum vinariorum (New solid geometry of wine barrels), which was his main contribution to the development of the integral calculus.

The wine barrel incident also led Kepler to take up a problem of differential calculus, the problem of maximums: What is the best design for a barrel in order to maximize its volume? Today, we solve this problem using derivatives because we know that, at a maximum (or minimum) value of a differentiable function, the derivative of the function is zero.

Fermat was the first to relate maximum and minimum problems to tangents to curves: at a maximum or a minimum the slope of the tangent to the curve is zero. Kepler was able to show that, despite minor differences, the proportions of the Austrian wine merchant's barrels were such that the procedure used to calculate the volume actually would be quite accurate, after all.
Posted by Kate Steve at 01:34 0 comments

In geometry, the tangent line (or simply the tangent) to a plane curve at a given point is the straight line that "just touches" the curve at that point—that is, coincides with the curve at that point and, near that point, is closer to the curve that any other line passing through that point. More precisely, a straight line is said to be a tangent of a curve y = f(x) at a point x = c on the curve if the line passes through the point (c, f(c)) on the curve and has slope f'(c) where f' is the derivative of f. A similar definition applies to space curves and curves in n-dimensional Euclidean space.

Similarly, the tangent plane to a surface at a given point is the plane that "just touches" the surface at that point. The concept of a tangent is one of the most fundamental notions in differential geometry and has been extensively generalized; see Tangent space.
The word tangent comes from the Latin tangere, to touch.
Posted by Kate Steve at 04:45 0 comments

Convergence (mathematics), refers to the notion that some functions and sequences approach a limit under certain conditions

Convergence (logic), the notion that a sequence of transformations come to the same conclusion, no matter what order they are performed in.
Posted by Kate Steve at 02:37 0 comments